Matt’s work as been acknowledged by the Silver Microphone Awards, the prestigious Telly Awards for his music scoring and the Communicator Awards for his radio production technique. His musiccan be heard around the world on radio, television, medical animations, corporate videos, films, and documentaries.

Matt’s acclaimed music score for The Inner Life of a Cell produced byHarvard University has brought Massive Productions world-wide acclaim. Featured on ABC World News with Charlie Gibson, the video has circled the globe, helping teach biology students all of the world by pairing animation with Matt’s innovative sound design and composition.

Derrick currently owns his own DJ Service titled Primary Instinct.Derrick has toured the world with his company providing a unique blend of music and sound design.

Since graduation Dan has played bass for Carnival Cruise Lines, a national tour of The Wedding Singer, and numerous musical theatre shows. Dan is currently playing bass full time for the Gold Unit of theRingling brothers and Barnum and Bailey touring Circus.

Carl is currently club pianist at the Commodore Club aboard theCunard Cruise Lines. Carl had also been a resident performing pianist for the Norwegian Cruise Lines.

Nick is currently living in Salmiya, Al ‘Āşimah, Kuwait where he is performing and teaching music at a private international school.

Jon owns his own recording studio doing outside mixing and recording projects, writing, arranging, and composing music. Jon has also started his own website development company.

MIKE DODGE was among 9 semi-finalists in that division, and was 1 of the 3 invited to sing in the Finals! He placed 3rd and received a $150 prize. The 1st and 2nd place winners were students at New England and Boston conservatories.

” In sheer, vocal terms, Daniel Brevik, as Don Pedro, the mayor of Lima, was the real standout. His is a world-class voice, a massive, focused baritone with a rich, warm timbre. He can look forward to major career in opera.”

A review in which PSU ’11 Alum Brady Lynch’s singing is reviewed (her NY Off-Broadway debut). See
below.

Based on A CHRISTMAS CAROL, was certainly not acting like a scrooge at the Beckett Theatre– pouring out
the talent, creativity and bringing the true meaning of the holiday season to the stage. Come to see this true gift
presented by the Pipe Dream Theatre, running through 12/23.

Through original routines and a youthful energy that impressively adds spirit to the play, this 90 minute/no
intermission production is a pleasure to watch. Ebenezer is played to a“Dickenson would be proud” perfection
by Elio Lleo and hearing Brady Lynch sing her part, Belle, is worth the ticket alone. The song sequences
roll out quickly and flow as the cast ensures it is a festive time with no dragging parts.

Chains, The Nightmare Before Christmas and Not at All The Same — are dance acts carried out with a freshness
that had the audience smiling and engaged. While 3 GHOSTS may have a high school production feel to it– it
complements rather than hinders its essence.

Grab a ticket before the holidays are over and let this spectacular 40 person cast delight you with fun for the
holidays through their version of a true holiday classic.

FYI: Brady has already signed a contract for a job with Disney Cruise Lines that will take her to South America,
Hawaii, et. al. for a number of months. She goes to Toronto for rehearsals in January. 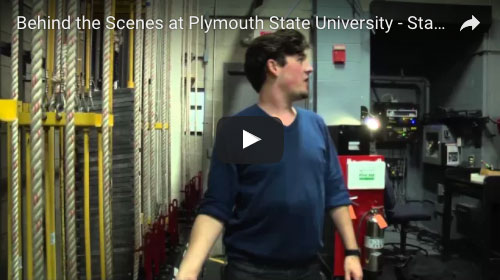 Behind the Scenes: Stage Production, Lighting and Costume Design