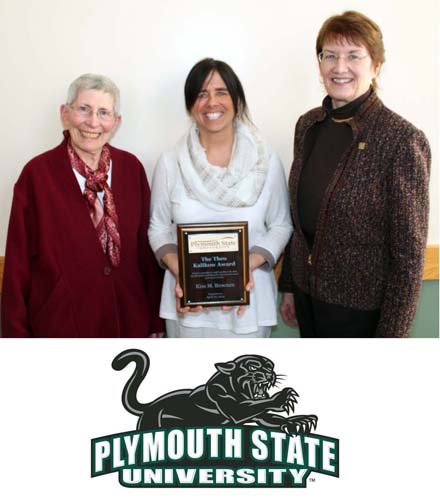 The PCSW is pleased to highlight our 2020 Award Recipients.

The Theo Kalikow Award honors a faculty or staff member who has significantly contributed to the advancement of women’s issues.

Professor McClinton is a Teaching Faculty Member in the Arts and Technologies Cluster. She works tirelessly to bring attention to women’s issues, and her classes have elevated the awareness of her students. In the words of one of her nominators, “being one of the only Black faculty members on a predominantly white campus, Professor McClinton has provided support and comfort to those of us who do not feel comfortable on this campus.”

In addition to that, Professor McClinton planned the 2020 Black History Month celebration along with student leaders from the Black Student Union and Afro Caribbean Culture Club. The weekly events showcased resilient Black women and their impact on the narrative of the nation.

Melissa’s Personal Statement: “Less than 4% of all American films were directed by women. In my courses, I introduce students to the issues surrounding the systematic exclusion of women in the highest echelons of the film industry. —Then I ask them ‘what are we going to do to change this.’  The number of films with female protagonists has been on a steady incline for the past 5 years, but still only makes up a third of all characters. Students don’t just quantify the roles, they analyze the quality of the character portrayals. Students learn the significance of the strides we are taking in contemporary times, and how they can keep the momentum going as young professionals in the changing field. In my courses, students must move from passive viewers to proactive analyzers.  —Shaping the future —being a champion of social justice and equity  These qualities define what it means to ‘See further up here.’”

The Student POWA (Powerful Outstanding Women’s Advocate) award honors a Plymouth State University student who has significantly contributed to the advancement of women’s issues while a student at PSU.

Ashley Hichborn is a graduating senior with an IDS Major and Women’s Studies Minor. In addition, she is the PSU student body president, involved with (and an officer in) SAVE ALL, currently playing a huge role in establishing the Feminist Facti student group on campus, and truly an admirable advocate for women and gender issues on campus and in her community. Last semester, Ashley completed an internship with Janette Wiggett in the Title IX office. Ashley has gone into classrooms and student clubs to talk about sexual violence, U-Safe, and to connect her fellow student with resources available to them on campus. In the words of one of her nominators, “Ashley is a feminist tornado!!!”

Ashley’s Personal Statement: “I am a senior designing an Interdisciplinary Studies major called Graphic Design for Promotional Communications with a minor in Women Studies. I am so honored to receive the 2020 Powerful Outstanding Women’s Advocate Award. I am forever thankful for all of the opportunities to advocate for women on this campus, such as working for the TitleIX department, starting a feminist club, being apart of the Sexual Assault & Violence Education Alliance, and spreading awareness of gender equality. I would like to thank the amazing faculty and staff at PSU for being incredible mentors and helping me become a life long women’s advocate.”

The Community Member POWA award is given to a member in the greater Plymouth area who has significantly contributed to the advancement of women’s issues.

As a board member of Voices Against Violence, and as a diligent prosecutor of domestic violence crimes, Cayla Kevlik Slaughter meets, and exceeds, all the criteria for the Community Member POWA Award.

First, Cayla is dedicated to bringing women’s issues to public attention. As a leading board member of Voices Against Violence, one of her primarily foci is to raise awareness of domestic violence against women. Both as a Co-Chair and Chair of the Development Committee, she specifically engages in outreach on behalf of Voices Against Violence. She has lead or engaged in Voices Against Violence’s public outreach events such as Dancing with the Stars, the Winter Ball, and the Clothesline Project on the Plymouth common. As part of these activities Cayla also engages with our PSU students to aid Voices Against Violence in their mission to break the cycle of violence by providing comprehensive services for all victims and survivors.

As a local prosecutor, Cayla has demonstrated genuine concern for the advancement of women by diligently prosecuting domestic violence against women so as to deter further oppression of women by those who physical abuse them.

Cayla’s Personal Statement: “I am truly honored to receive this reward and wholeheartedly appreciate all the work other members of our community have done to contribute to the advancement of women’s issues. Our community may be small, but there are so many ways to advocate and further the advancement of women. I encourage all to take advantage of these opportunities and advocate not only in our community but on state, national, and global levels. Together we can make great change. Thank you again for your recognition.”