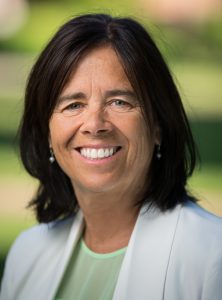 Plymouth State’s multi award-winning staff member, Kim Monika Bownes, was appointed as Interim Director of Athletics in June 2015 and will continue in this position through the 2016-2017 school year.

Kim is a graduate of McGill University in Montreal, Quebec, Canada, receiving a Bachelor of Education in 1982. Kim completed her Master’s Degree in Education with a concentration in Athletic Administration at Plymouth State University in 2008.

Kim began her career at Plymouth State in the fall of 1987, when she was appointed as the head men and women’s alpine ski coach. She was highly successful for 21 years in this position and ended her career with several national championship team and individual awards as well as multiple ‘Coach of the Year’ accolades. After retiring from coaching, Kim assumed a full-time position as the associate director of athletics.

Kim was a teaching lecturer at Plymouth State for 8 years in the Health and Human Performance Department, teaching “Coaching Effectiveness” and co-teaching “The Burdenko Method – Russian Training Methods”. She is most proud of her original “cluster” with the exercise physiology department more than 7 years ago. This “cluster” enabled her team to work with the exercise physiology students doing in-depth testing which was a great benefit to all of the students involved. Eventually, several varsity teams joined the cluster.

As an avid outdoorswoman, skier, hiker, cyclist, cook and photographer, Kim has always enjoyed the White Mountains to the fullest. She believes strongly that modeling healthy behaviors is the best way to mentor student-athletes.

In her first year as Interim Director of Athletics, Kim led the department through many initiatives at both the institutional and departmental levels. She has implemented several events for student enhancement, and looks forward to building on these in the future. Kim states, “It is the job of an A.D. to produce successful young men and women, in the classroom, on the playing field, and in their future endeavors in the workforce and as engaged, giving alumni.”

Scheduling and Speaking requests should be made to

Requests for Media interviews should be made to