Other than the idea of clusters themselves, the cluster I receive the most comments and concerns about is Innovation and Entrepreneurship. In particular, this is with regard to its current depiction at the center of the cluster diagram and secondarily the idea of entrepreneurship as a business concept. First let me quickly address what I mean by entrepreneurship. The history of the word from the French and the Latin is the idea of one who undertakes. It is further described in Wikipedia (I know totally non scholarly- but handy) as describing “qualities of leadership, initiative and innovation in new venture design.” There is also the implication of “team-building” and “converting an idea into a successful innovation.” In Engines of Innovations (Thorp and Goldstein, 2010), the word “entrepreneur” meant “to take action” and it refers to one who shifts and adapts resources from one area to another area for higher productivity (p. 6). Qualities to be embraced in the spirit of entrepreneurship involve being:

Entrepreneurs innovate because they see problems as opportunities. By modeling entrepreneurship in our organizational structure and our integrative cluster engagements, we are teaching our students the art and science of entrepreneurship. I hope you can see the idea of action and undertaking to make something come of what we are exploring and discovering, that benefits the world and teaching others to do the same, is in essence what we are about.  That word (entrepreneurship) and the cluster it is associated with is really one of two concept clusters that embody the foundational core on which clusters are grounded. The other cluster is Exploration and Discovery.

Why would we embed these four areas in the clusters and why give Innovation and Entrepreneurship such a central position? Most individuals would agree that exploration and discovery should be central to any great university in both teaching and research, but what about innovation and entrepreneurship? There is a story in this.

During World War II professors from universities across the country, industry and government worked collaboratively on everything from breaking codes to perfecting radar to creating the atomic bomb. This integration of government funding, industry production and university innovation led to one of the most profound eras of advancement in U.S. history during and after the war. But a belief grew during this period that insufficient advances had been made in exploration and discovery. So Vannevar Bush, who was in some sense the founder of the National Science Foundation, developed a policy that split apart basic research (exploration and discovery) from application (innovation and entrepreneurship). Universities were to focus on basic research and industry and on applications of that research. In time, however, those two efforts (the integration of exploration and discovery and innovation and entrepreneurship) grew so far apart that something called “Yankee Ingenuity” started disappearing.

The academies and the funding organizations began looking at this and came to the conclusion that two things needed to happen. First, we needed to reintegrate the disciplines and second, we needed to consider innovation and entrepreneurship (applied research) as an integrated stream that runs from exploration and discovery through to application via innovation and entrepreneurial thinking. That is the reason we depicted innovation and entrepreneurship at the center of our cluster diagram – because it has been the missing ingredient for so long. This is not solely a business concept, just like exploration and discovery, is not just a science and technology concept.  Our view is that it is part of a holistic and integrated perspective that is embodied in all we teach and do at a university and it is one of the founding principles of public higher education (Morrill Act). Should Innovation and Entrepreneurship always be front and center and do we have the best words given legacy usage? Probably not, but for the very reason we are discussing it, and the fact that it has been considered something apart for so long, we placed it in the center of our cluster diagram and linked it up with Exploration and Discovery. The idea is to say, no matter what you study, whether Arts and Technologies, Education, Democracy and Societal Change, Justice and Security or Health and Human Enrichment, Exploration and Discovery and Innovation and Entrepreneurship are not just business and science concepts, they are overarching themes for all of our clusters, but they need to have a home, hence the cluster names.

Now, with this foundation, Cathie LeBlanc and others are looking at a better way of presenting these concepts and clusters. So look forward to future better depictions of clusters and these key concepts/clusters (as below). And please try to put aside your concerns, if you have them, at least for the time being. 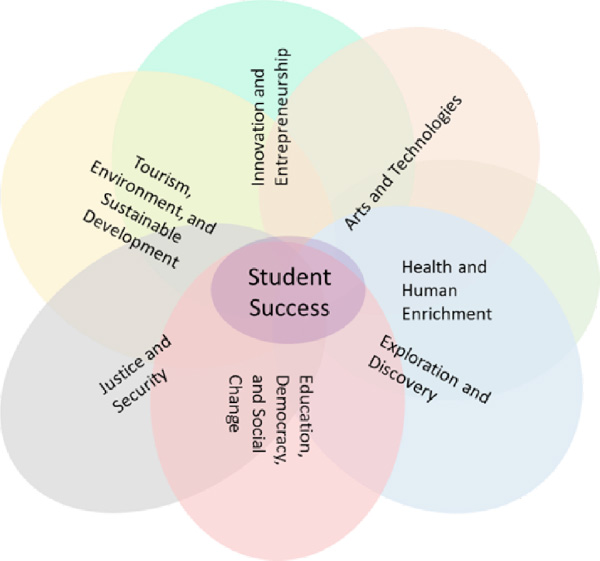 Scheduling and Speaking requests should be made to

Requests for Media interviews should be made to