Dr. Rebecca Busanich supervised PSU student Lacey Mailman, a senior in the Applied Health Fitness major, in an undergraduate research project titled “The Sociocultural Construction of Physical Activity During Pregnancy: A Media Analysis.” The aim of this project was to analyze the cultural discourses around physical activity (PA) for pregnant women by conducting a media analysis grounded in social constructionism of a popular media/informational outlet for women during pregnancy (i.e., Fit Pregnancy Magazine). It is important to understand the ways in which women construct ideas around physical activity during pregnancy, as it influences their PA behaviors and associated emotional well-being during this time.

Three main cultural discourses surrounding PA & pregnancy were identified: 1) PA as a tool to shape women’s flawed & imperfect bodies, 2) She can (and must) do it all, and 3) The “all natural” woman.

The results were consistent with the literature on sociocultural constructions of physical activity during pregnancy and early motherhood (Choi et al., 2004; Fell et al., 2009; Johnston et al., 2004), demonstrating that part of this construction may be resulting from, or reproduced by, the popular media (Markula, 2001). The construction of physical activity as a body shaping tool is no different for pregnant women than it is for the general female population, as research shows that many women tend to construct, and hence use, physical activity in this way (Busanich & McGannon, 2010; Markula, Burns & Riley, 2008). Combined with the notions that pregnant women must “do it all” (e.g., exercise in the kitchen, clean & exercise & care for baby at once, breastfeed & work simultaneously) and must do it in a “natural” way, pregnant women may be left struggling with how to negotiate physical activity during this time. This may lead to many pregnant women choosing not to be active while pregnant (e.g., why be active when my body will be gaining weight & getting larger anyways?) and/or struggling with how to fit PA in following pregnancy (e.g., how can I do it all and do it all perfectly?) (Choi et al., 2004; Fell et al., 2004; Mottola & Campbell, 2003), resulting in negative physical health consequences as well as feelings of self-loathing and negative psychological well-being associated with PA experiences.

A research poster highlighting this project was presented by Lacey Mailman at the annual PSU Research Symposium in April 2013. 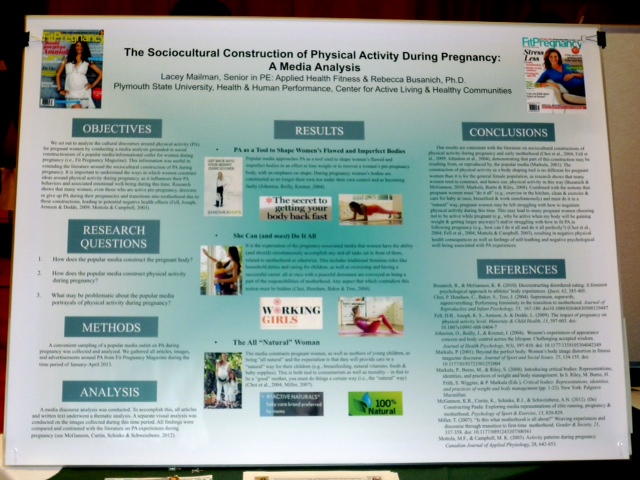