According to the most recent study[i] published by the Bureau of Economic Analysis, New Hampshire’s economic output grew by 3 percent in 2016, the fourth highest rate in the country. The state’s finance and insurance sector helped fuel that performance, along with gains in retail and durable goods manufacturing. The publication noted that the largest industry in New Hampshire was finance, insurance, real estate, rental, and leasing. This industry accounted for almost a quarter of New Hampshire GDP (the market value of all goods and services produced) and had 2.5 percent real growth. The second largest industry was professional and business services.

The present report finds that foreign firms have the strongest presence in New Hampshire’s finance and insurance industry, relative to their presence in all other industries. The subsequent industries where foreign subsidiaries operate by numbers are retail trade and manufacturing, showcasing that foreign direct investment has been playing a role in the state’s growth.

The analysis presented in this section identifies how foreign firms participate in business activity. Most New Hampshire foreign subsidiaries are service providers. In terms of presence (number of firms), distributors rank in the middle, whilst producers are the lowest percentage, comparatively. 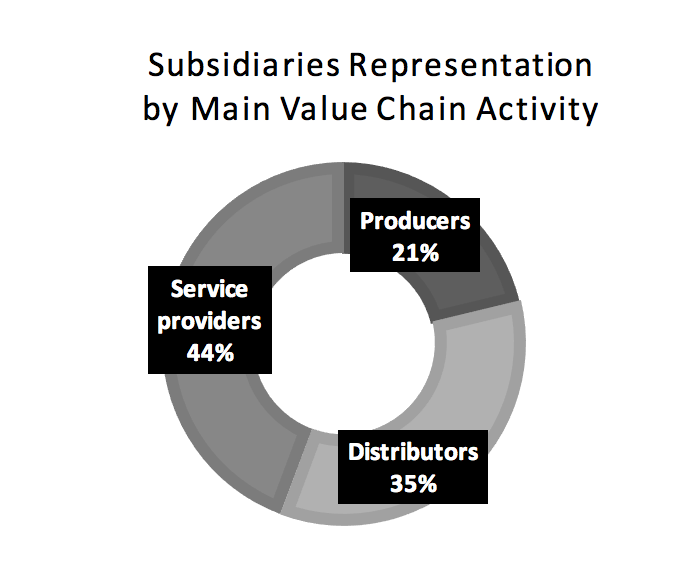 Companies providing services do so across a diverse set of industries. Services are represented by large financial companies such as The Royal Bank of Scotland Group, the Canadian TD Bank Financial Group and Banco Santander of the Spanish Santander Group, as well as by other global companies such as the Canadian High Liner Foods, the Dutch TomTom, and the UK based InterContinental Hotels Group. Some foreign firms may have more focus in services in New Hampshire than globally, such as the Shanghai Electric Printing and Packaging Machinery Group. Foreign retailers are represented by some large, well-known parent companies, like, for instance, the French multinational Air Liquide, Deutsche Telekom, and the Dutch international retailer Ahold. Royal Dutch Shell and the Canadian Irving Oil are represented. Other known foreign names operating in the state are the German Siemens, the Japanese Bridgestone and Sumitomo Corporations, the Swedish Axel Johnson, the French group Rexel, the French Sonepar, the UK-based Rotork, the Canadian Gaz Métro, the Spanish Fomento de Construcciones y Contratas, the Australian Braemac Pty and Novocure from the Channel Island Jersey.

Multinational manufacturers present in New Hampshire include the Irish Medtronic and CRH, the Swiss Lonza, the British BAE Systems, the German Freudenberg and Osram, the French Saint-Gobain, the Japanese Minebea and the Dutch Velcro. Food and beverages multinationals operating in the state include the French Groupe Danone, the Belgian Anheuser-Busch InBev and the Swiss chocolatier Lindt & Sprüngli. The company names mentioned here are not meant to be all inclusive and they are used only to give some examples of representation across countries, objects of activity and industries.

Half of foreign subsidiaries in New Hampshire are in retail trade and manufacturing combined. Retailers are almost double in numbers as compared to wholesalers. Nevertheless, wholesale is a relatively highly represented object of activity of foreign firms. Trade in general represents the object of activity of 34% of the firms. Comparatively, a low number of firms are in services outside finance and sales. Professional, scientific and technical services is ranked behind financial services, trade and manufacturing.

Foreign companies have a presence in most industries in our state. Our sample does not include foreign subsidiaries in the following industries (data was not found): agriculture, forestry, fishing and hunting (NAICS code 11); education services (NAICS code 61); healthcare and social assistance (NAICS code 62); arts, entertainment and recreation (NAICS code 71); public administration (NAICS code 92). 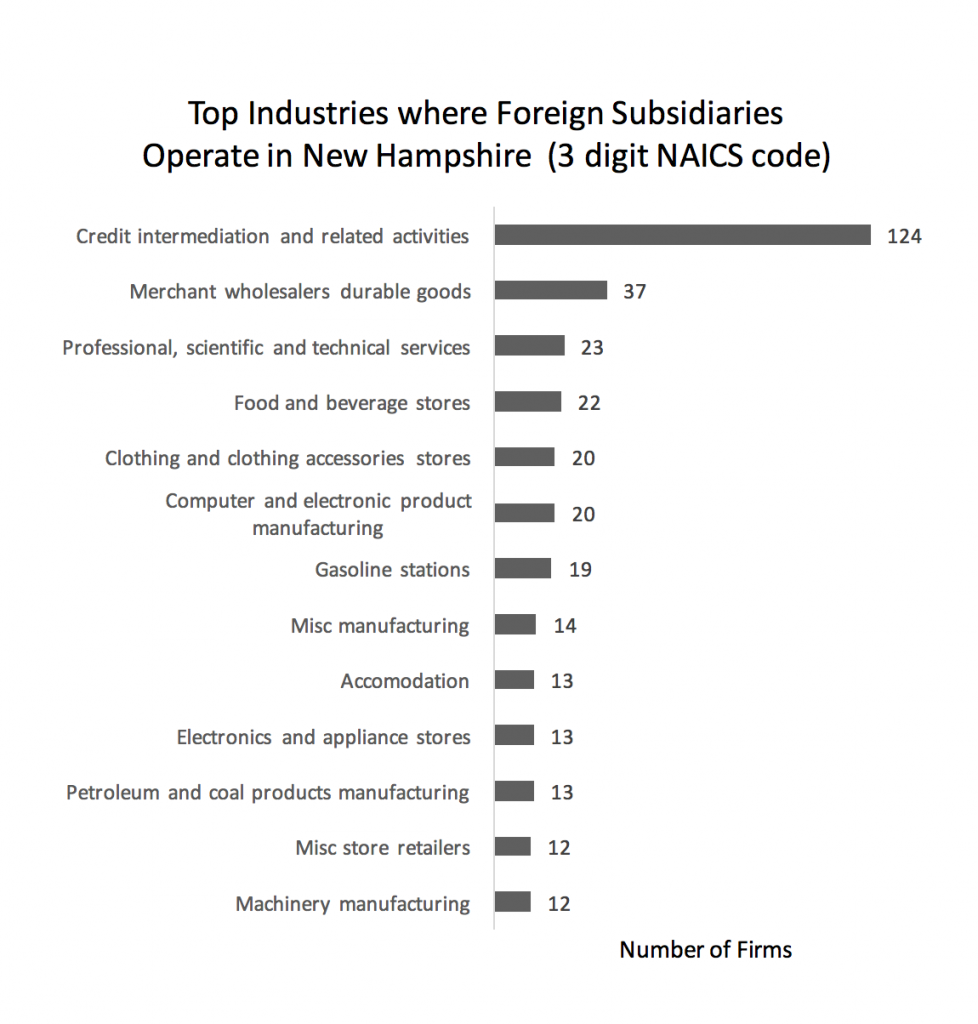 Almost 60% of the New Hampshire industries in which foreign firms operate have fewer than 5 firms. Each of these industries (listed in the table below) have a number of firms that represents less than 1% of the total sample. Overall, the distribution of foreign firms across industries shows diversity but also some concentration of firms (by numbers) in a few industries and particularly in credit intermediation.

[ii] Industries are considered in this report with the use of The North American Industry Classification System (NAICS).  The NAICS industry codes define establishments based on the activities in which they are primarily engaged.

Information on NAICS and NAICS codes can be found at https://www.census.gov/eos/www/naics/.